The First World War made a real difference to football in Scotland. Headlines began to appear in the papers about footballers enlisting. Letters commented on the great boost there would be to recruitment if popular footballers led the way. During matches, the slogan ‘Kitchener Wants You!’ was carried round at half-time on placards and there were many appeals for recruits to ‘join the fun before it is all over!’.

In 1914, the Football Association and the Scottish Football Association agreed to abandon International matches. The SFA also decided to scrap the Scottish Cup competition. Players’ wages were to be reduced by 25% and later fixed at £1 per week. No wages were paid during the close season and footballers were expected to take their place alongside the other workers in the munitions factories and shipyards. League matches were confined to Saturdays and holidays and players could only take part if they had worked the rest of the week.

In season 1916/1917, after having won the previous two league titles, Celtic started promisingly, with a series of performances which delighted the manager Willie Maley, the Board of Directors and the fans. By the third week of December, the playing stats were;-

On this day in 1916, Celtic travelled to the north of Glasgow, to Firhill, where they would meet Partick Thistle in a league match. This was the second clash of the clubs in this competition that season, the first one at Parkhead ending in a goalless draw. Because of that and due also to the fact that the Jags were doing quite well in mid-table, Willie Malay put out a strong side of Shaw, McNair, Dodds, Wilson, McStay, Brown, McAtee, McMenemy, McColl, Cassidy and Browning.

Thistle certainly put up a good show but Celtic were always the more fluent team. They made a number of good chances and eventually scored with two of them, thanks to Jimmy McColl and John Browning, gaining another two points in their drive towards another championship.

NB From the start of season 1913-14 to halfway through season 1924-25, the name of Charlie Shaw was an almost ever-present in goal for Celtic. During those years, he made 436 appearances, in 240 of which he kept a clean sheet, an incredible ratio of 55%.

NB2 The ‘McStay’ at centre-back for Celtic that afternoon was Willie, the older of the two brothers who were mainstays of the Celtic defence from 1912 to the early 1930s. Willie had joined Celtic in 1912 but then had loan spells with Vale of Leven and Ayr United before coming back to Celtic in July 1916. He got his chance that season because the regular incumbent, Peter Johnstone, had decided to join the forces, being called up to

the 14th Battalion of the Argyll and Sutherland, playing his final match for the club in the Glasgow Cup Final win over Clyde on 7th October 1916. In the summer of 1917, Peter Johnstone lost his life at the Battle of Arras, leaving a wife and two children, Nellie and Peter.

In the first days of 1966, every supporter of Glasgow’s big two was really excited. After 16 matches, Celtic and Rangers were locked together at the top of the table. And as he fans headed towards Celtic Park for the New Year derby, they had conflicting aims for their respective clubs. Those favouring the Light Blues wanted another title to add to the ones already picked up in the decade of the 1960s, in 1961, 1963 and 1964. For fans of the Hoops, the ambitions were equally clear; they wanted their guys to win the title for the first time since 1954.

For the first time, I was involved as a player. I had joined Celtic in January 1965, made the first team in the autumn of 1965 and was now holding down the right-back slot and really looking forward to my first ‘Old Firm’ match. I was also under no illusions as to what the fans expected. Every one I met when I was out and about in Glasgow told me that they were expecting a good win and they would be really ‘gutted’ if that did not happen. Talk about pressure!

The match got off to a bad start for us, when Davie Wilson opened the scoring for Rangers in 2 minutes. However, from that point on, we took control, kept Rangers under the cosh and never let them back into the game. However, we had to wait until after the interval for our goals, which came from Steve Chalmers (49 and 62), Charlie Gallagher (68), Bobby Murdoch (79) and Chalmers again right on the final whistle to give us a resounding 5-1 win. 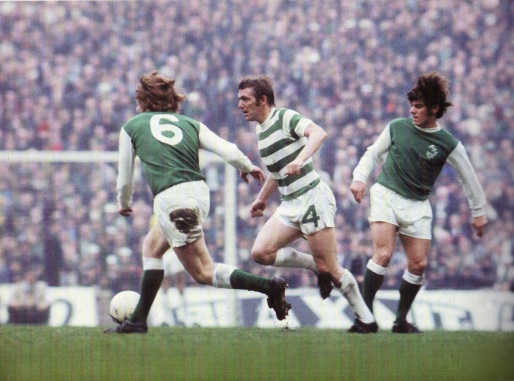 As you might imagine, our fans were deliriously happy; the Boss and his management team were quite pleased too, although also keen to point out that we had a game against 4th placed Dundee United coming up in five days time. From my own point of view, I was very pleased, both with the result and my own performance. “Old Firm contests” I thought, “ they’re a skoosh!”.

On this first day of the new century, there were more important matters than football for the papers to write about. The Boer War was occupying the minds of our politicians and making the front pages, while there were also  calls for foodstuffs and clothing to be sent to the front.

Matches were still going ahead, though, and on this day in 1900, at Celtic Park, the Bhoys faced Rangers in the final match of the league campaign, already won by the Light Blues.

Some newer players were involved that day. Bob Davidson, who had joined from Dykehead 18 months before, was at right-back.

Harry Marshall, known as the ‘Portobello Boatman’ was at centre-half

And got another two before the interval, John Divers scoring both of them to give him a total of 6 for the season.

After the break, Rangers came back and scored twice to equalise but Celtic got a chance to go further ahead from the penalty spot when Bell was pulled down. Divers had the chance of a het-trick but he missed and Celtic had to hold on to take the win by 3-2.

On this Christmas Day in 1966, Celtic were 2 points behind Rangers in the race for the league title. Both the Glasgow giants were in action that afternoon, Rangers hosting Dunfermline at Ibrox and Celtic welcoming Morton to Parkhead.

‘The Ton’ was having a bad time of it in the league – constantly in the bottom four – and although they had some fine players in attack like Alan McGraw and Joe Harper, the defence was shipping too many goals.

NB There was even better news for anyone with Celtic’s interests at heart as news came through from Ibrox that Rangers had lost to Dunfermline, thus putting the two clubs on the same points at the top of the table, with Celtic ahead on goal average;-

NB2 After the match, while everyone in the dressing room was celebrating, I raced into the showers, dressed quickly and dashed for my car. I was still living with my parents at the time and my Mum ( who did not have the slightest interest in football) had told me that I had to be at my Gran’s house in time for the Christmas dinner to be served. I went over the speed limit quite a few times in that late afternoon but I made it! And Gran’s smile was worth all the rush!

As usual, on this special day, I have attached a photograph of my teammates, this one taken in the dressing room at Parkhead in the late 1960s. From the left, Johnstone, Wallace, Lennox, Brogan, Murdoch, Chalmers, Fallon, Callaghan, Craig, McNeill, Gemmell and Hughes.

Wherever you are in the wide Celtic World, may I wish you, on behalf of Elisabeth and myself in our Perthshire home plus our four sons and daughter, with our seven grandchildren – now scattered in New Zealand, London, Cardiff, Stirling and Glasgow – a very Happy Christmas.

In December 1967, of the two football pitches of First Division clubs in the one road in Dundee, the one belonging to Dundee FC was the favourite of my teammates and myself. The turf at Dens Park was firm, well-cut and had good drainage, so it was an ideal surface for any club with aspirations of playing good football, as the teams of both Dundee and Celtic of that era tried to do.

On this day in 1967, in a league match, a Dark Blues side lying in mid-table hosted a Hoops team sitting in second place, two points behind Rangers. Jock Stein put out an eleven of Simpson, Craig, Gemmell, Murdoch, McNeill, Clark, Johnstone, Wallace, Hughes, Lennox, Auld and they got off to a great start, Billy McNeill scoring in 5 minutes.

Only 3 minutes later, Dundee equalized but goals by Bobby Lennox (26), Jimmy Johnstone (36) and Willie Wallace (38) gave Celtic a 4-1 lead. Back came Dundee, though, with another goal to make the half-time score 4-2.

Wallace scored again to make it 5-2 for Celtic ten minutes into the second half but the Dark Blues rallied and got two further goals in 76 and 85 minutes to make the final score Dundee 4 Celtic 5.

NB In midfield that day for Dundee were Steve Murray – later to join Celtic – and Jim McLean, who became manager of Dundee United; while playing up front was Davie Wilson, ex-Rangers.

NB2 Dundee’s record victory was 10-0, a feat they managed twice, both times in Division 2 in 1947, firstly against Alloa on 8th March and then against Dunfermline on 22nd March. Their record defeat was in Division 1, on 26th October 1895, at Celtic Park, when Celtic won 11-0.